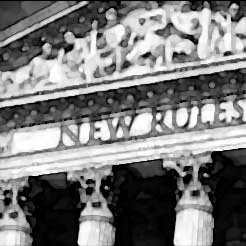 And finally, New Rule: A candidate for president should not be judged by the color of his skin. And to – and to anyone who thinks differently, I say, please do not reject John McCain just because he’s white. I think the recent news from Wall Street has made us all less tolerant, and only reinforced the stereotype that white people are shiftless, thieving welfare queens.

Now, take a look at these pictures. Here are the CEO’s of Fannie Mae, Freddie Mac, AIG and the Lehman Brothers. I know the first thing that jumps out about these faces is they all happen to be white, and they all happen to be responsible for stealing. But, what you have to understand is that these whites are a product of a society that made them that way.

It was the neighborhoods and the schools they went to: Harvard, Yale, the Wharton School of Business.

They never learned the value of doing real, actual work. And the first step to fixing that is better role models so kids growing up white today don’t think the only way out of Westchester is corporate crime.

Or a government handout. Or sailing.

So, I get it. The temptation is to look at McCain and vote against him because you don’t see an individual; you just see another typical welfare „whitey.“

And it’s true. He spent his entire life shuffling from one low-paying government job to another. Well, except those years he spent in prison. Typical. And, between you and me, he’s not very articulate.

Oh, he may have some street smarts, but he’s not what you’d call an „educated“ man. He freely admits he’s ignorant about the economy. And apparently the only thing his white running mate knows how to do is crank out one baby after another.

And now, of course, her teenage daughter is pregnant out of wedlock, because she learns it at home!

But, that doesn’t mean we should assume all white people are like that just because so many of them are. I believe there is hope. I believe even the stupidest, greediest, laziest whites can break the cycle of dependence, like this November when we finally move George Bush out of public housing.